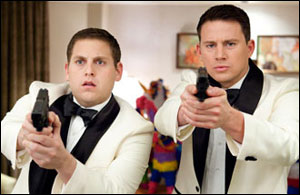 Sony Pictures is gunning for another "21 Jump Street," closing a deal with Jonah Hill and Michael Bacall to develop a treatment for a sequel that Bacall has signed on to write.

While negotiations have not yet begun, Hill and co-star Channing Tatum are expected to return, not only in front of the camera, but also as exec producers. Producer Neal Moritz is also likely to return. 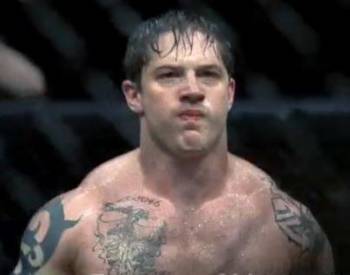 Well, that didn't take long. Just one day after Tom Hardy inked a first-look deal over at Warner Bros., he's signed up for a new movie with studio.

Hardy will take the lead and produce an untitled biker pic penned by Mark L. Smith ("Vacancy," "The Hole") that takes place in the '60s, is about California's most violent biker club, but is apparently based on original idea from producer John Linson, but apparently has nothing to do with the Hell's Angels. Or least that's what the announcement in Variety would have you believe. Maybe there is legal hoola hoops in using that name, or perhaps the concept from the "Sons Of Anarchy" producer really is novel, but it's a bit odd the biker group isn't mentioned at all.

Brazilian BBQ kicked my ass. I may never eat again.

I want to throw up but I like it.

And I am super nice and waited, I suppose I should make my own announcement.

I guess I really need to thank LJ for taking a small strangefancy all those years ago and somehow, linking her with a tiny

vval. In the years since that fateful day, the two have managed to become so BFF-y, that they had to come up with their own term for it (OTB = one true brain). Miles, time changes and the horrible laptop dying of '05 couldn't stop these two.

I suppose I'm jumbling everything up in my head but in a nutshell? Valy will be here in about a month. To live. For good.

I went to look at our new apartment yesterday. It's like a tiny house and I, for one, cannot wait.

So thank you, LJ. The day I got the invite to join was a very good day indeed.

In a moment of pure panic, I tried to describe my new fandom addiction to the GBFF the other day. Of course, with him being the GBFF, he completely understood when I said "shirtless, fighting, occasionally hug groping" and accepted it without second thought. But in haste, before I managed to utter that phrase, I came up with a new one.

Then I started thinking about it. Then I expanded on the idea in a conversation with

Maybe you're one of those people with a pairing/ship so dark and disgusting, you don't want anyone to know why you watch Futurama (or whatever) on repeat. For those of you, I have come up with the following handy phrases to explain your obsession (and just why you accidently sent that fic you wrote to your co-workers when you meant it to send it home) without really having to explain:

Thank you and good night.

Since Val said I wouldn't.

I suck. I know my last post was along the lines of "yay, I'm super going to post an awesome 'this is my life now' for everyone to read!" but I never did. I don't know if it's because of the laziness of myself or because I'm kind of nervous in getting back into this.

What's a fangirl to do without a regular fandom anymore?

But I suppose, for anyone interested, this is my life now:

I also plan on uploading pics of this stuff soon along with posting again. And I won't take so long next time.

It's been awhile (months and months, which means I super-suck) and I promise that in the next couple days I will make a mammoth post about the latter half of my year. I mean, NYC trip, promotion, new apartment news, ACL, what?

But, just because I am besides myself, I feel the need to post the following:

My OTB is coming here for Christmas!

vval will be here in 19 days and there isn't anything that isn't wickedly awesomely cool about that!

Just everyone please hope that my boss lets me rearrange my work schedule to accommodate.

Thank you so much!

Or to toss and turn in yonder bed?

Why can't I make myself go to bed already?